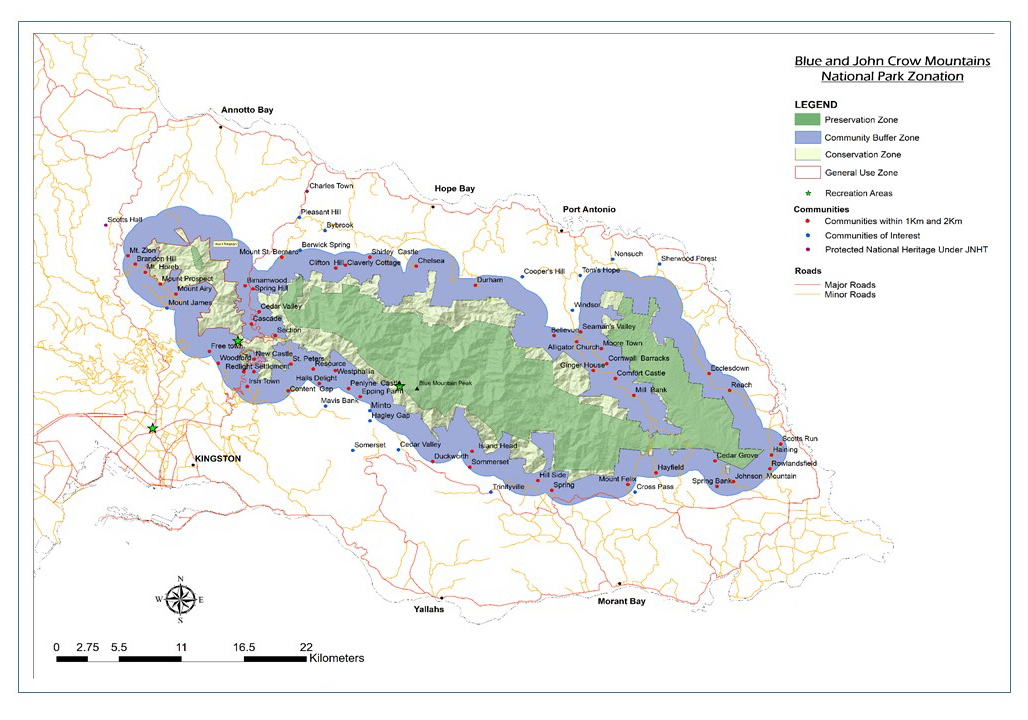 The Blue and John Crow Mountains National Park (BJCMNP) is located in the eastern end of the island of Jamaica and includes Jamaica's highest point – the Blue Mountain Peak at 2,256 metres. The park covers an area of 41,198 hectares (101, 802 acres) and incorporates much of the interior of the parishes of Portland, St. Thomas, St. Andrew and a small section of south-east St. Mary.

The park accounts for 4.4% of Jamaica’s land surface. The steep mountain slopes form the upper sections of ten (10) of the island’s twenty-six (26) watershed management units. The Blue and John Crow Mountains National Park comprises three mountain ranges – the Port Royal Mountains to the west, the Blue Mountains, and John Crow Mountains in the east; divided by the Buff Bay and Rio Grande Valleys on the north side of the ranges.

Surrounded by a buffer zone of 28,494 hectares, the pristine primary forest of the Blue and John Crow Mountains was designated a UNESCO World Heritage Site in 2015 for its natural and cultural heritage. 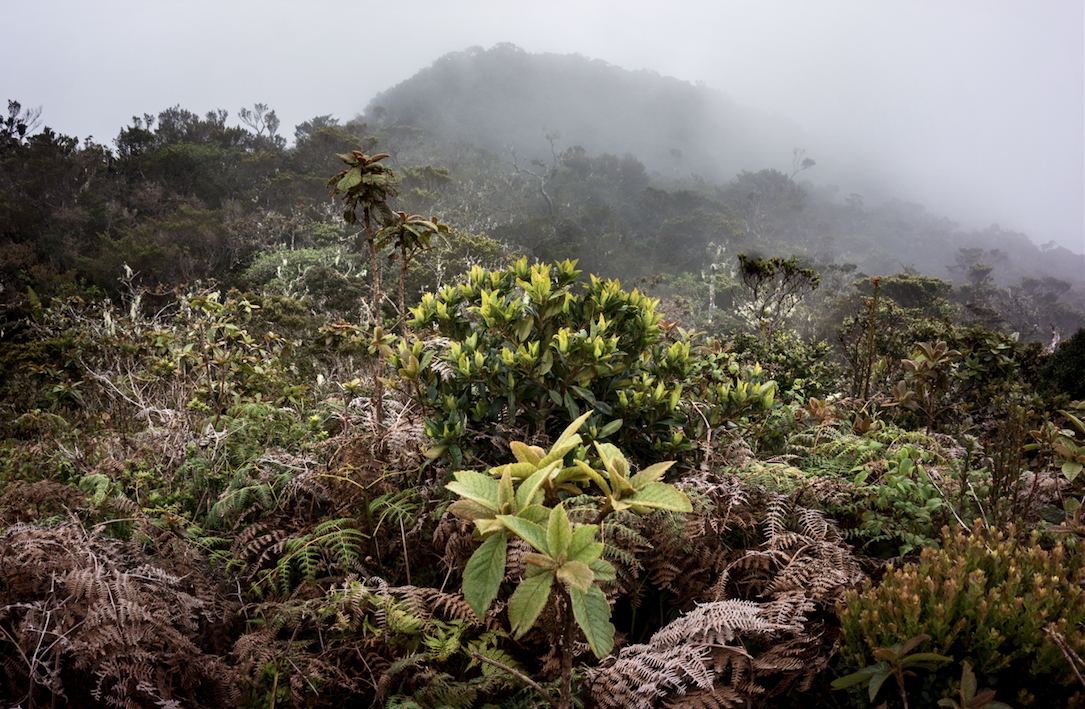 Jamaica is believed to be the product of prehistoric volcanoes. The central ridge of the Blue and John Crow Mountains range comprises metamorphic rock that has pushed through surrounding limestone during the land ascent from the sea floor. As the island of Jamaica evolved, deep basins formed between the Cretaceous rock of the Blue Mountain range and the limestone plateau in the west. The rock formations visible in the range and surrounding areas are a combination of conglomerates, sandstone and shale.

A unique feature of the Blue and John Crow Mountains is the Cloud Forest – a rare habitat of tropical mountains – making up only 1.2% of all tropical forests in the Americas and 2.5% of tropical forests globally. In Jamaica, montane cloud forests are found only in the Blue Mountains. Occurring at elevations 1,000 metres and higher, they are unique to the Caribbean. Cloud forests of similar elevation (for example in Hispaniola and Cuba) feature coniferous trees, but the Blue and John Crow Mountains is dominated by broadleaf trees with only two native conifers e.g. Juniper Cedar (Juniperus lucayana) and Mountain Yacca (Podocarpus urbanii). 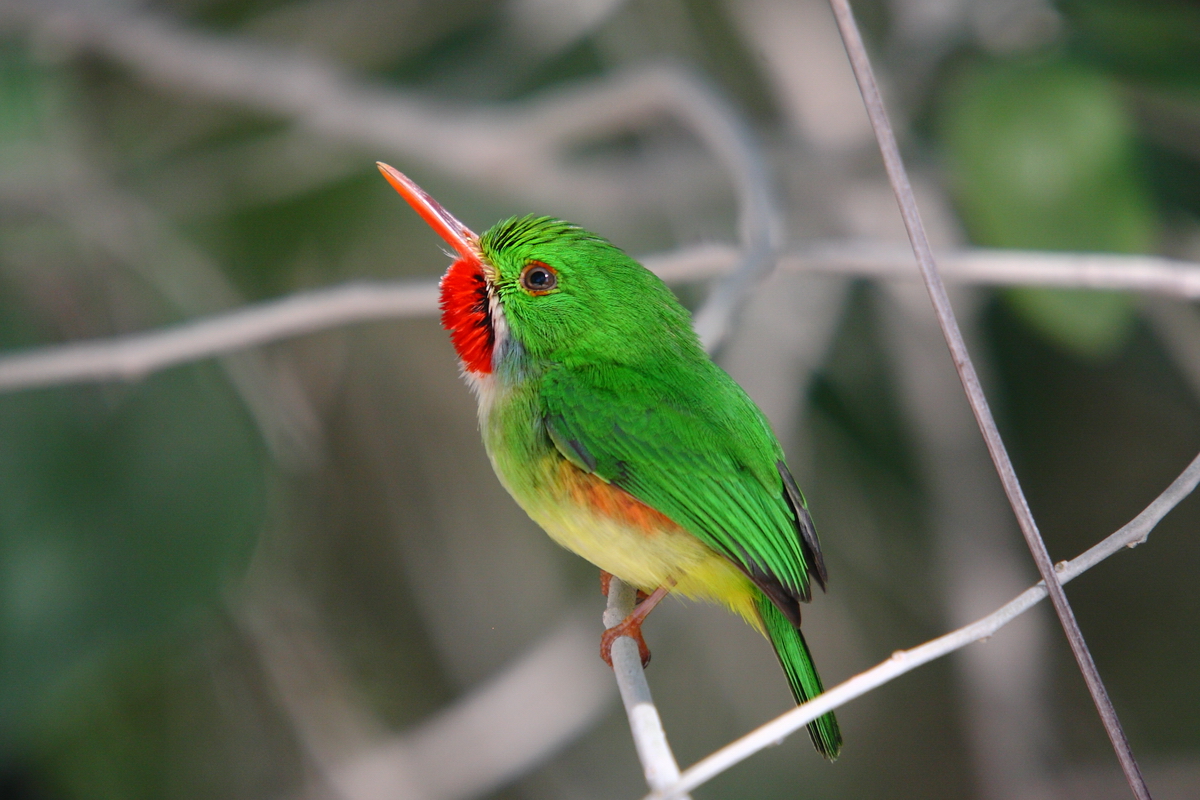 Jamaica’s Blue and John Crow Mountains sustain biodiversity of global significance. It is among the Caribbean’s 290 Key Biodiversity Areas and the Caribbean’s 48 Wholly Irreplaceable Sites. The National Park is also on the International Union for Conservation of Nature and World Wildlife Fund list of 200 globally important sites for the conservation of plant biological diversity and is noted as an irreplaceable protected area for the conservation of the world’s amphibian, bird and mammal species.

Over half the flowering plants in the national park are found only in Jamaica and about one third are endemic to the national park. At least 40% of the higher plants (flowering and non-flowering) are also endemic to Jamaica. The forest is made up of large trees such as Juniper Cedar (Juniperus lucayana), Blue Mahoe (Hibiscus elatus) and Soapwood (Clethra occidentalis) and smaller shrubs such as Hot-lips (Cephaelis elata) and Jamaican Rose (Blakea trinervia). To capture sunlight in the thick forest, many plants climb up the trees, like Climbing Bamboo (Chusquea altifolia) whilst others spend all their lives on the branches of trees, like orchids and bromeliads. Tree ferns and other plants that like a lot of water are common in the Blue and John Crow Mountains.

The trunks and branches of the trees are covered with a wide variety of other plants such as lichens (a combination of algae and fungi) which are usually grey-ish green and are either flat against the tree (or even on rocks) or hang from tree branches like Old Man’s Beard.

For most Jamaican land animals, the Blue and John Crow Mountains National Park is their last refuge - a large area of natural forest where they are protected from human disturbance. The region is one of two known habitats of the Giant Swallowtail Butterfly (Pterourus/Papilio homerus) – the largest butterfly in the Western Hemisphere. The Cockpit Country is the other location.

To support the population of this endangered butterfly species, the Jamaica Conservation and Development Trust has worked with members of the Bowden Pen Farmers’ Association, which is based near the habitat of the Giant Swallowtail, to establish a plant nursery that grows the Water Mahoe (Hernandia catalpifolia). This plant is the only source of food for the Homerus butterfly caterpillars. The seedlings have been used to reforest several degraded areas, and this has likely contributed to the increasing numbers of the butterflies seen in the area.

The national park is one of the largest bird migratory sites in the Caribbean. Along with Jamaica’s endemic birds, it hosts over 200 bird species throughout the year; making it a great location for bird-watching. It is the only place on the island where all Jamaica’s unique birds can be observed, including the endangered Jamaican Blackbird (Nesopsar nigerrimus). Other highlights for bird enthusiasts include: Rufous-throated Solitaire (Myadestes genibarbis) Mountain Witch (Geotrygon versicolor); and the Jamaican Tody or Robin Redbreast (Todus todus).

While there are no large or poisonous animals in the Blue and John Crow Mountains National Park, it is home to four of Jamaica’s six endemic snakes. The Jamaica Boa (Epicrates subflavus) is the largest and can grow up to 2 metres (6 feet).

The national park is a major habitat for Jamaica’s amphibian population; the other being the Cockpit Country. The region supports 11 of the 23 species of endemic frogs; five of which are only found in the Blue and John Crow Mountains National Park.

The Blue and John Crow Mountains is also the habitat of the Jamaican coney (Geocapromys brownii). Once though to be extinct, the rodent is the largest endemic animal on the island. 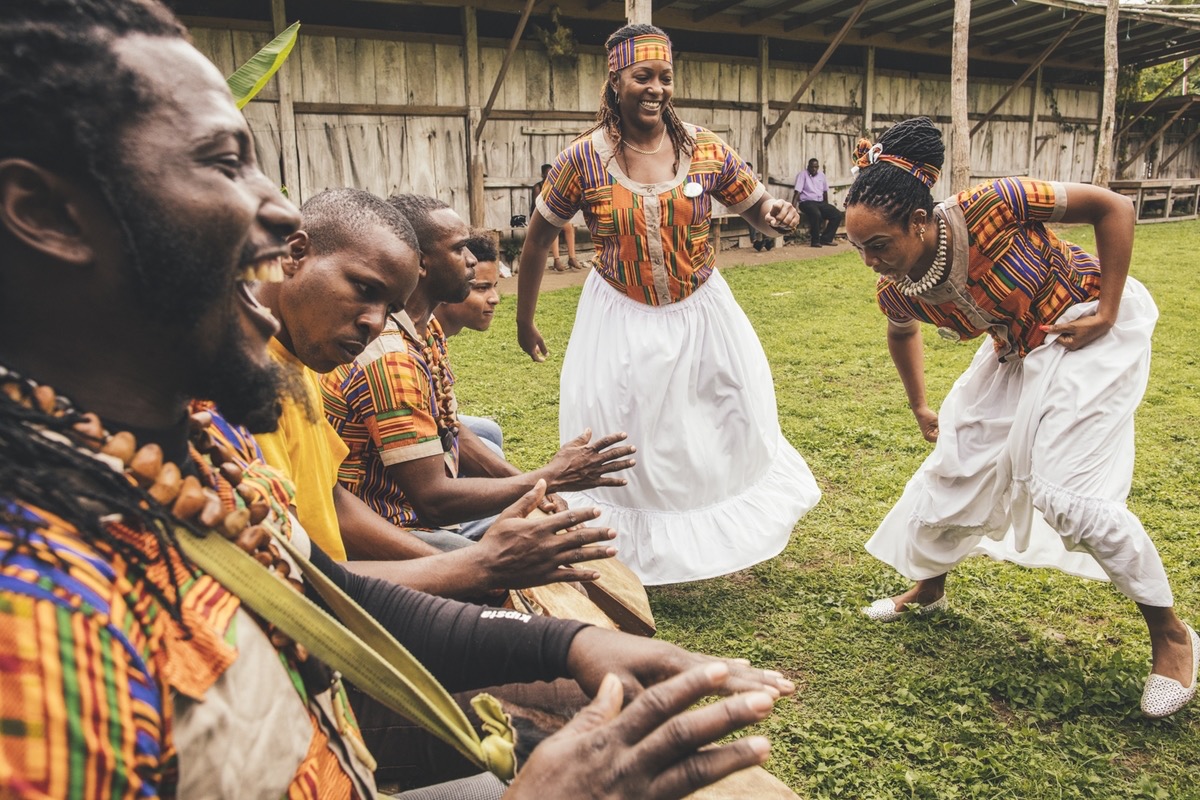 The inscription of the Blue and John Crow Mountains National Park as a UNESCO World Heritage Site in 2015, recognized the natural as well as the cultural heritage of the region; specifically - The Windward maroon communities. Their story begins 500 years ago during the imperial race to capture territory in the New World. The Spanish Conquistadors claimed Jamaica first and with the subsequent death or desertion of the indigenous Taino, they looked to African labour to establish their society. Some of these Africans escaped and joined the Taino in the hills and mountains. The absconded Africans were labeled Maroons; a derivation from the Spanish word for ‘wild’ - Cimarrón. When Britain challenged Spain for control of the island in the 17th century, the Conquistadors required their African slaves to join the resistance. They chose freedom instead and retreated to the mountains.

The Windward maroons would settle in the Blue and John Crow Mountains while the Leeward maroons made the Cockpit country their stronghold.

The absconded Africans were labeled Maroons; a derivation from the Spanish word for ‘wild’ - Cimarrón. The Windward maroons would settle in the Blue and John Crow Mountains while the Leeward maroons made the Cockpit country their stronghold.

The rugged topography, lush forests and numerous water sources were used by the Windward Maroons to wage their successful guerrilla warfare against the British. The signing of the Peace Treaty in 1739 secured the sovereignty of the Maroons and brought the war to an end. The Maroons established their communities in the most remote sections of the island. Separated from mainstream society, the maroons became a time capsule of pre-colonial African traditions; which is evident today in their unique language, theology and music.

There are three main Windward Maroon communities: Moore Town in the Rio Grande Valley, Charles Town in the Buff Bay Valley and Scotts Hall in the Wag Water River Valley.

The music of the Moore Town Maroons has been recognised by UNESCO as a "Masterpiece of Oral and Intangible Heritage". The Maroons still retain many traditions in their governance, music, dance, drumming, cuisine and use of herbal remedies amongst others.

The JCDT appreciates the involvement and support of our Partners, Donors and Sponsors